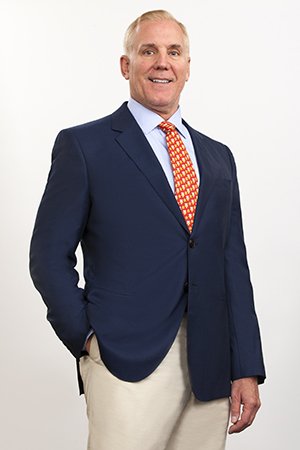 A graduate of Johns Hopkins University, Dr. Krug received his medical degree from Columbia University College of Physicians and Surgeons where he was elected into the Alpha Omega Alpha Honor Society. After completing medical internships at New York Hospital-Cornell Medical Center and Memorial Sloane-Kettering Cancer Center, he served a three-year ophthalmology residency at Wills Eye Hospital in Philadelphia. He was also a clinical fellow in glaucoma at the Massachusetts Eye and Ear Infirmary of Harvard Medical School.

Dr. Krug is the current chairman of the ophthalmology department at Novant Health Presbyterian Medical Center. Upon completion of his fellowship in glaucoma at Harvard, Dr. Krug remained on the faculty as Assistant Director of Glaucoma Consultation Service. He has since lectured on numerous topics at health centers throughout the country, as well as international glaucoma meetings.
He has been involved in clinical research of new medical and surgical therapies for glaucoma and cataracts. He has served as a consulting ophthalmologist for an international pharmaceutical corporation, as well as the Charlotte Community Health Center providing free eye care to patients in need. He has published over two dozen reports, reviews, abstracts and book chapters. During his career he has also served as team ophthalmologist for the Charlotte Panthers, Charlotte Hornets, and the Charlotte Checkers and has been recognized numerous times as one of the ‘Charlotte's Top Docs’.

Dr. Krug and his wife Julie have one son, Christopher, and one golden retriever, Yankee.
« Return to all Doctors

“If only we could pull out our brain and use only our eyes.” – Pablo Picasso ... See MoreSee Less

We're celebrating Valentine's Day all month long with our See Love Clearly promotion. Explore LASIK together and get $250 off each eye. ... See MoreSee Less

Thank you for your interest in our LASIK promotion. When you signup for a LASIK consultation we offer a $250 per eye discount on your LASIK procedure.

Our latest blog post is live on the site. Read Dr. Weidman's article on the importance of retinas and the common diseases that affect this part of the eye. After all, the more you know, the more likely you are to recognize a sign early on. And the earlier the treatment, the better the prognosis. #charlotteeyedoctors ... See MoreSee Less

Why Our Retinas Are Integral To Vision | Horizon Eye Care

Though just a half a millimeter thick, our retinas convert light into our ability to see. Learn about common diseases and issues with retinas.